What is a Power Purchase Agreement?

Is a PPA free?

What are the advantages and disadvantages?

Solar PPA vs leasing or buying

Who else offers PPA?

What is a Power Purchase Agreement (PPA)? 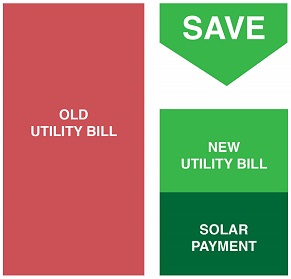 While many households would love to go solar to reduce their electricity bills and reliance on the grid, many simply can’t afford the upfront cost of buying solar panels outright.

However, if you cannot afford the price of a solar PV system, that does not necessarily mean missing out on the environmental benefits of solar, or forgoing the savings on your electric bill.

Some customers lease their PV system. Others opt for a Power Purchase Agreement (PPA), where an outside company owns the system, handles the permit and legal requirements, arranges installation and maintenance, reaps the tax benefits, incentives, and income from excess power generated, and allows you to purchase the electricity produced by the system on your roof from them rather than relying on your local power company.

A PPA is a great option for households who cannot afford to buy solar panels outright. However for those homeowners who do have the spare cash required to purchase solar panels outright, the return on investment will be much greater by buying instead of leasing or entering a Power Purchase Agreement.

Is a PPA Free?

While installation, equipment and maintenance costs are usually absorbed by the PPA provider, you’ll still have a monthly bill. Or two; for customers in areas with less predictable insolation (daily sunlight), solar may not mean being able to get rid of your existing energy bill. You’ll have two meters and two electric bills, since some of your power is likely to be drawn from the grid, especially at peak consumption times or periods of lower sunlight.

What Are the Advantages and Disadvantages of a PPA?

The cost of a PPA typically increases — sometimes dramatically — over time, to a point where it costs more than ownership. It’s not helped by the fact that many incentives are based on the cost of the system, which is often an incentive for the company offering the PPA to charge higher rates for a less expensive system.

That’s right. Since the companies from whom you lease want to maximize profit, they will typically use low-cost, lower-quality components. Most tax advantages, rebates and other financial incentives go to the owner of the equipment. Leasing? You won’t see those benefits.

There’s an added wrinkle. Want to improve your home to increase its resale value? You’ll need approval from the company that owns your PPA. And when the time comes to sell, bear in mind that while PPAs are transferrable, they require excellent credit, and can sometimes be a deterrent to those buying a home — the new buyer may not want the added obligation and monthly payment, leaving either you or the buyer to buy out the remainder of the contract. Also, like a mortgage, your PPA can be sold by the company that originated it to an outside company.

That’s not to say there are no advantages to a PPA. Rates are typically lower than your current electric bill. There are low (or no) installation costs. There are also no maintenance costs, since the owner of the equipment is responsible for its upkeep. Also, given that the cost of producing solar is fixed, you may have the option to pay up front for multiple years’ worth of power and save money.

PPAs and solar leases are identical in many respects:

There’s one key difference: with a PPA, you’re only buying the electric generated by the system. By way of analogy, think of a local dairy leaving a couple of Jersey cows in your backyard, sending someone round to feed them once in a while, but letting you take the milk from the cow for a monthly fee. To extend the analogy further, they’ll also sell your leftover milk and get the subsidies that go with being a dairy farmer.

The cost to buy a PV system can seem high, but once you factor in tax credits and exemptions, rebates, carve-outs, and the ability to sell the excess power generated back to your utility company, that cost is significantly offset.

It’s possible to pay back a solar system within a short time of installation, meaning that the power generated after that is effectively free, and any surplus generated amounts to profit.

While many companies offer PPAs, SolarCity has quietly become a market leader. They design, install and maintain the PV system, and they offer some flexibility in their PPA plans.

The plans range from a zero-down option, to a small prepayment that lowers the amount of your PPA bill, or the option to prepay the entire PPA, in which case the only power bill a homeowner would have for the PPA term would be for electricity drawn from the grid. Customers also have the option to purchase the PV system when the term of the PPA expires.

Who Else Offers PPA?

PPAs are legal in 25 states, plus Washington, DC and Puerto Rico. The regulations and consumer protections vary — sometimes greatly — from one state to the next, with some jurisdictions placing practically no restrictions on PPA availability, while others restrict them by sector, system size, or certain utility companies.

Not all companies listed below operate in all areas where PPAs are available.

Solar energy comes with a host of benefits for homeowners and the planet alike. If you’re exploring solar as an option for your home or business, this is an exciting time.

Switch to Solar and Save

Solar panels can reduce your electricity bills to almost zero.

How Much Do Solar Panel Cost?

What Are The Best Solar Panels?

How Do Solar Tax Credits Work?

How Efficient Are Solar Panels?

Thousands of people use The Eco Experts to find accredited suppliers and installers. If you are interested in becoming part of our supplier network please get in touch, we would love to hear from you.